Wildlife in the Orchard

The most common bat recorded through our survey was the Pipistrelle (the bat boxes detected two species), but a larger species, probably the Noctule, was occasionally detected at the valley end of the Orchard. Activity/numbers flying were greater between May and September. This would coincide with the use of maternity roosts first by pregnant, and later by lactating females with young. This indicated the importance of the Orchard as a foraging area, at critical periods, for a roost nearby. There was more activity on warmer evenings. Surprisingly, there was no greater activity when the blossom was out or during fruiting - when more insects (the bats' prey) would have been attracted. The Pipistrelles seemed to prefer flying in the gaps between the cherry trees, and were more often detected in the northern sectors of the Orchard. 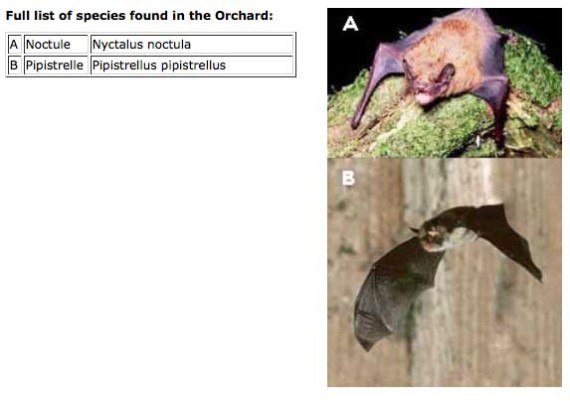 Following successful fungus forays, a wide diversity of fungi has been observed and recorded at the orchard. The following species were identified by fungi expert Jo Weightman. 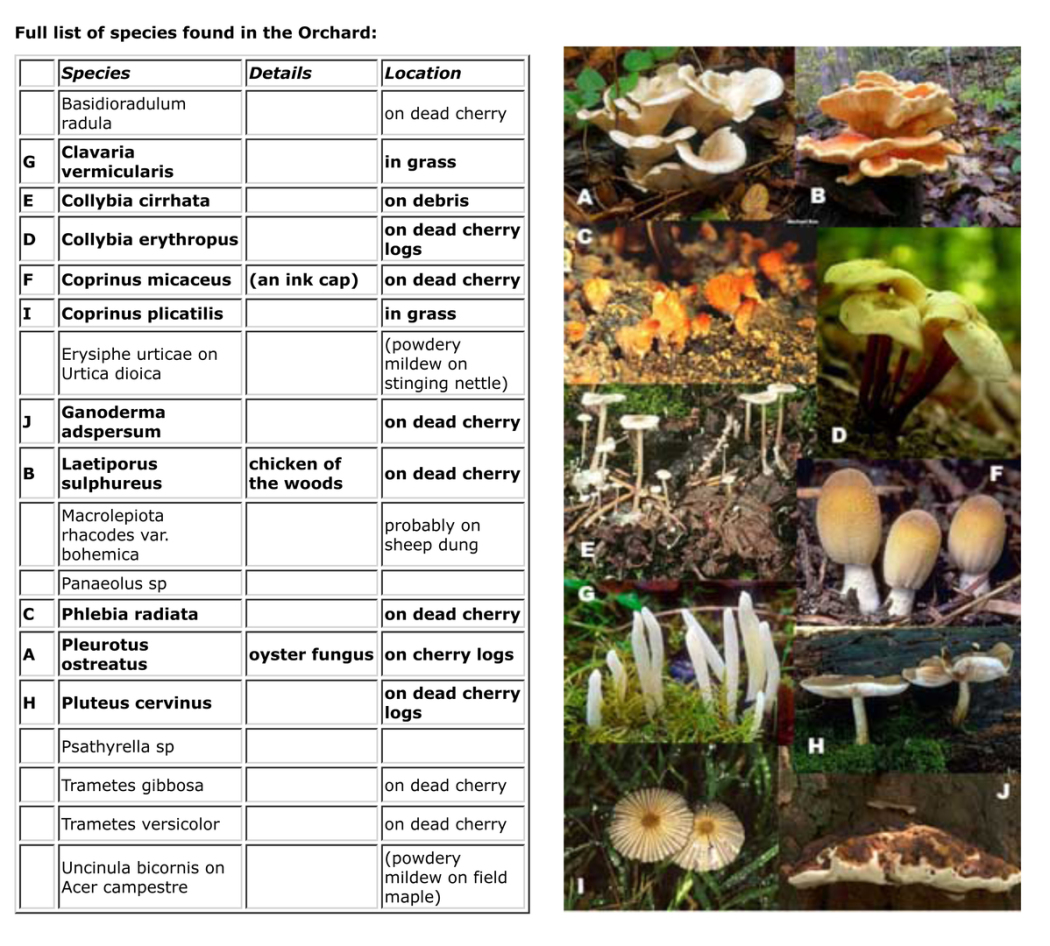 Populations of moths are dependent on the provision of suitable plants and trees upon which the caterpillars and sometimes the adult insects feed - seeing the diversity will hopefully encourage you to encourage them into your gardens and to manage your local area sympathetically.

The following mammals were identified through a small mammal survey carried out on the 18th and 19th February 2006 by Bridget Neame for the Kent Mammal Group. Non-lethal traps were laid near log-piles and other sheltered areas in the orchard, and in the surrounding hedges and the follwing species were identified. The following comments were made:

The lack of bank voles was surprising, and unexplained. The presence of yellow-necked mice was also a surprise; they are much less common than wood mice, and are usually associated with ancient or coppiced woodland. They are much more arboreal than other mice (apart from dormice). One was male and one female, indicating a small colony. The wood mice probably forage in the Orchard at night, and hide in the hedge area during the day. 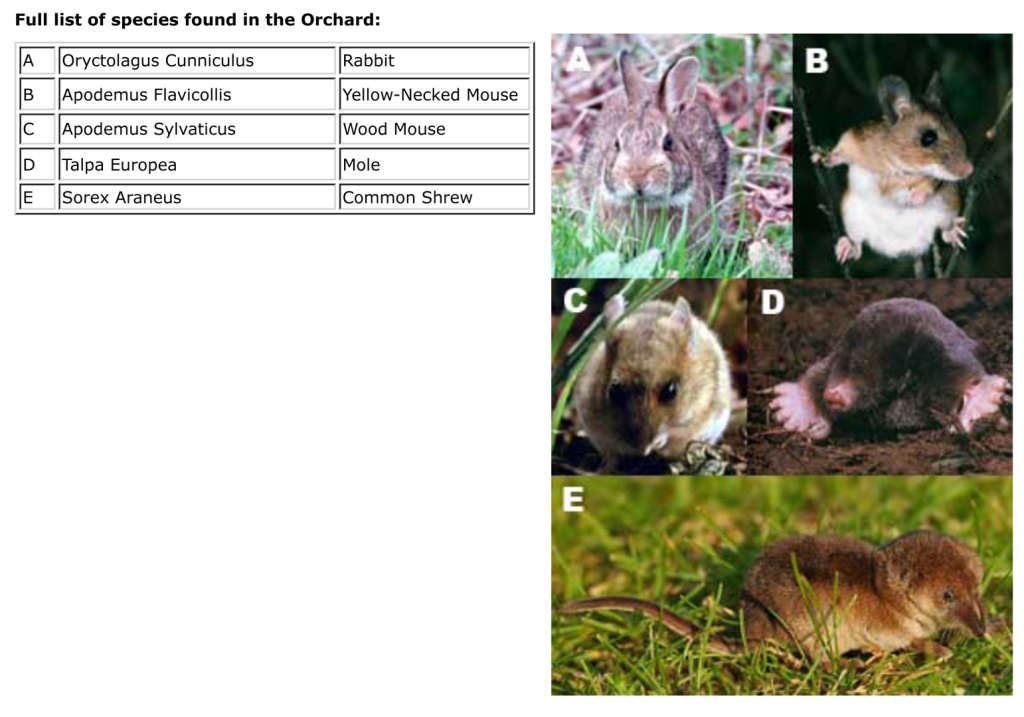 The following birds were identified through a survey carried out at 0800 on the 8th June 2006 by Barry O'Dowd, RSPB Warden, Elmley Nature Reserve, Sheppey, Kent. Most of the birds were resident species. There was no evidence of warblers, probably due to it being slightly late in the season, and the lack of song because of the very hot morning.

Additionally: Little owls are regularly seen in the orchard. Pip Neaves, whose house is on the south east of the site, regularly sees great tits, pied wagtails and goldfinches.

The old trees in the orchard provide a rapidly disappearing habitat in North Kent as many are removed due to being un-commercial. They do however provide an incredibly rich habitat for birds, insects and fungi in particular. 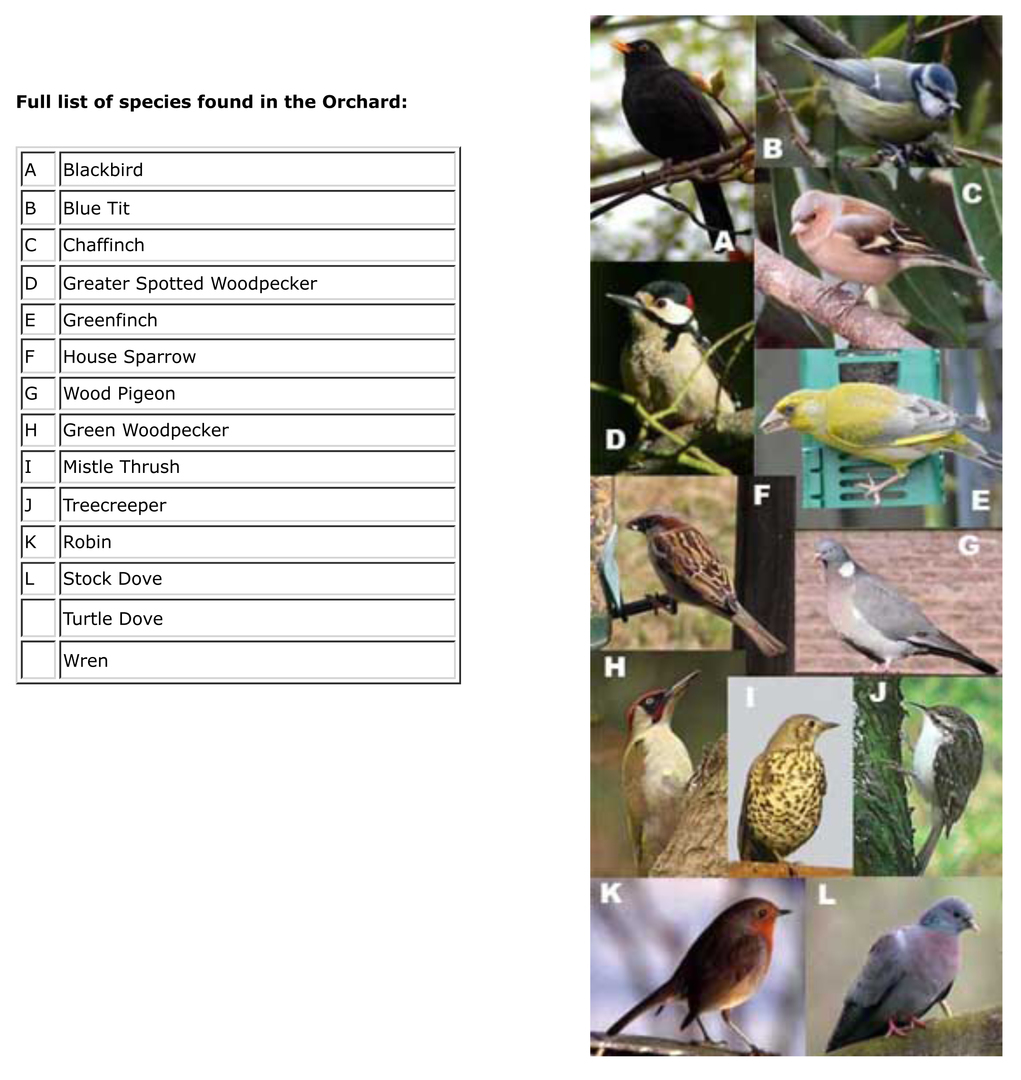 These were the main species existing in the mature hedges on the west and north sides of the orchard:

An updated list has been created following a subsequent foray led by Martin Newcombe in 2013. Click on the link below.

All Events for 2021 are To Be Confirmed Due to Coronavirus

Zoom Meeting for The Cherry Orchard Committee due to Coronavirus Restrictions

Cancelled due to Covid Restrictions

Halloween in the Orchard:

We are located at:

If you have any queries about the Orchard, please contact us:

Get social with us.